Prostate cancer is the most commonly diagnosed cancer in men in the UK, but it is twice as common in Black men as in the rest of the population. 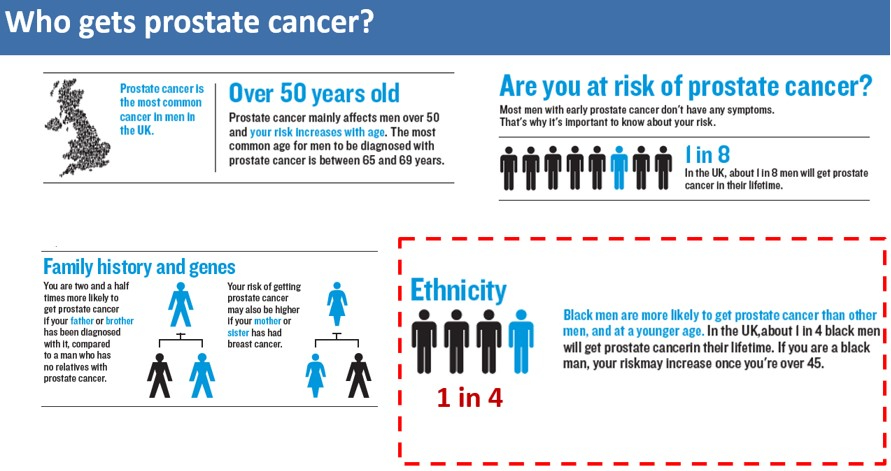 However, the COVID-19 pandemic has had major impact on prostate cancer referrals. As part of the ‘Find the Missing Men’ campaign, the National Health Service (NHS) and PCUK have been working in partnership with all the cancer alliances in England to promote the awareness of prostate cancer and its early diagnosis.

The reduction in men coming forward during the pandemic to discuss symptoms with primary care clinicians, usually at the GP practice, means there must be a significant number of males with prostate cancer who are undiagnosed.

The six-week ‘Find the Missing Men’ campaign ran in February and March 2022, and encouraged these men to come forward to discuss their concerns about the disease as prostate cancer can be treated very successful or even cured when found early.

Cheshire and Merseyside Cancer Alliance (CMCA) backed the ‘Find the Missing Men’ campaign, but we wanted to specifically focus on the one in four Black men who will get prostate cancer and created a campaign to target communities in central Liverpool to deliver our message.

Working to overcome health inequalities in Cheshire and Merseyside is one of the Cancer Alliance’s main aims in its vision to create better cancer services, better cancer care and better cancer outcomes.

We worked with Prostate Cancer UK (PCUK), Merseyside community groups, Primary Care Networks (PCNs) in central Liverpool and GP surgeries to create a local project to raise awareness of the risk of prostate cancer in Black men as part of a national campaign alerting people to the need for early diagnosis.

The risk checker tool helps to inform people of their risk of prostate cancer based on their age, ethnicity and family history. It then advises those with a higher than average risk to discuss this with their GP surgery.

As the senior project manager providing leadership on this project from CMCA, I worked with over 15 local community organisations to shape the message we wanted Black men to hear – and worked with a team to deliver engagement events that deliver our objectives. 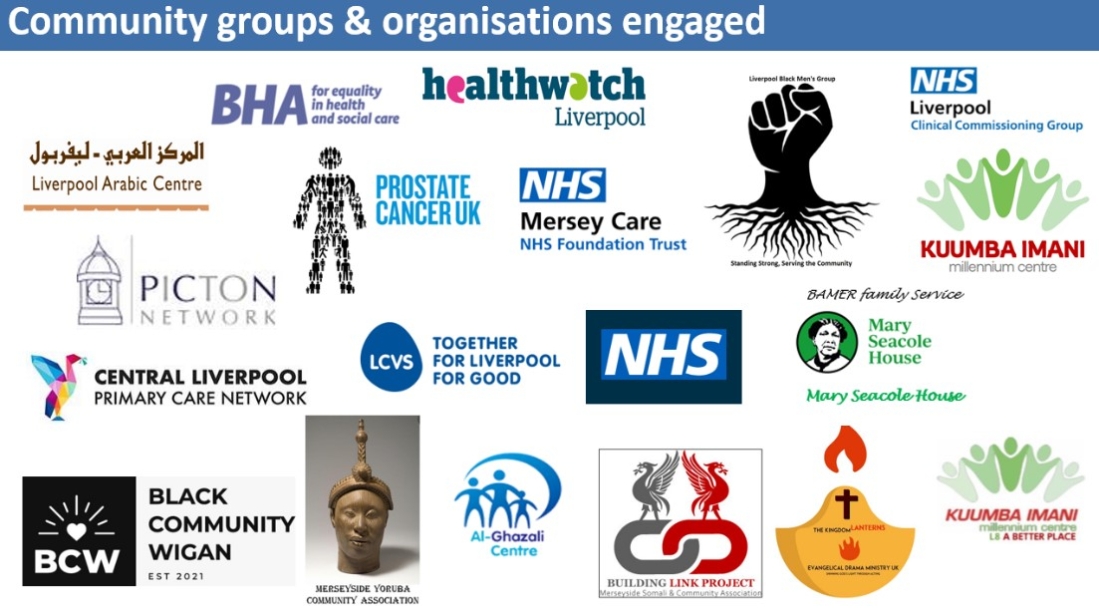 The collaboration was a huge success and the learning from our meetings with these organisations resulted in engagement events that were well attended and received.

During the organisations of the campaign, we discussed the messaging with our primary care colleagues in the communities to ensure successful result. While understanding the signs of prostate cancer are very important, PCUK informed us that due to the increased risk of Black men developing the disease at a younger age and in a more aggressive form, waiting for these symptoms to appear could be too late for successful treatment.

Therefore, we developed the message ‘Discuss Your Risk’, asking Black men to contact their GP surgeries or PCUK Specialist nurse to talk about the chances of them developing prostate cancer, based on their age, ethnic profile and family history of cancer.

This message informed the printed literature we produced, promotional material for the campaign and the digital and social media messages we created for ‘Discuss Your Risk’.

We worked hard to ensure strong involvement of clinicians from both primary care and secondary care including local GPs, clinical specialist nurses, and consultant urologists.

We also positively engaged with three prostate cancer survivors to refine this messaging who also helped us with social media to promote our engagement events urging men to understand their risk of the disease.

Our campaign ran for two weeks (March 1st to 17th, 2022) and this included a health talk event in Liverpool, centred on an area with a high population of men from an African and Afro-Caribbean background. 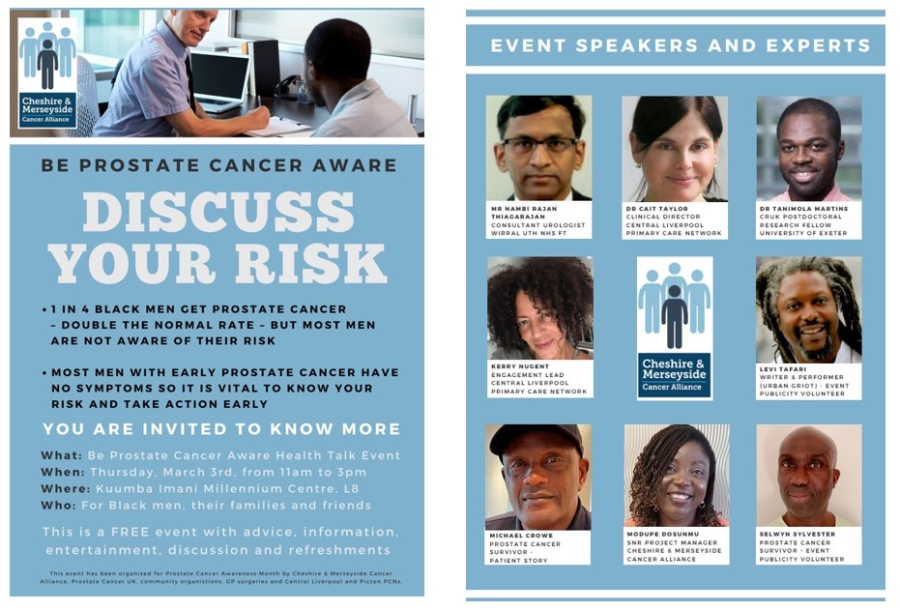 We invited Black men from the age of 45 to attend the event at Kuumba Imani Millennium Centre, in Liverpool, on March 3rd. Speakers at event include clinicians and patients (pictured) giving useful information and expressing their experience of prostate cancer, answering questions and urging men to discuss their risk and equip them with the ability to make informed decisions and choices about their health.

There was also a 15-minute film dramatisation of prostate cancer from an African perspective. With my film production hat on, I led the film production crew that produced the film, which highlighted to the target audience the general negative attitude towards discussing cancer alongside the key message to change that attitude. You can watch the video here - https://www.youtube.com/watch?v=TUhu54mVePE

We promoted the event through social media, traditional media and videos, which included messages from local poet Levi Tafari, the Mayor of Liverpool Joanne Anderson, Saeed Ibrahim, Coordinator of Merseyside Somali and Community Organisation and local prostate cancer survivor Selwyn Sylvester, which are on the Alliance's YouTube channel: https://www.youtube.com/channel/UCbklFyEC5cFjiKYAaYYZD-w. 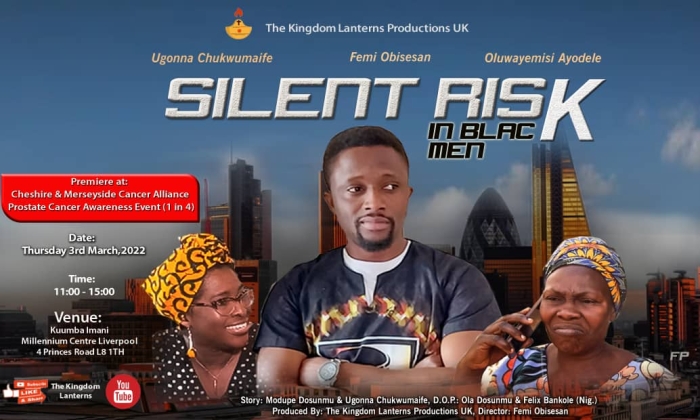 During the event, there was the chance for men to have a PSA blood test. A phlebotomist was at the event for a number of hours, discussing the test and taking samples, which would then be tested, and the results sent to the person’s GP practice so the patient could be informed and offered further advice.

The event held on March 3rd was a great success. More than 90 people attended the event and 23 people did the PSA test at the event. The PCN has reported that there were least two abnormal test results and GPs have reported increasing numbers of men asking to discuss prostate cancer risks and PSA testing.

In addition, 15 men registered to become prostate cancer volunteers/champions, spreading information about the Discuss Your Risk campaign to their networks and organisations they belong to. As well as this, 42 Black men received COVID-19 vaccination at the event from the Central Liverpool PCN COVID team.

There was very good coverage of the event, including coverage on ITV News (https://www.youtube.com/watch?v=_55xDZVOjdk), The Guide, Granada TV, MerseyNews, and Liverpool Echo.

The event was also well received by those who attended.

Morfu Bello, is 48 and signed up to be a prostate cancer awareness champion at the event. He works with a charity in Liverpool and will be using those contacts to spread the Discuss Your Risk message.

He said: “Cancer in the African community is a stigma. People do not want to talk about it. Some people still think it is contagious.

“After this event I am more aware and informed and will be able to speak to others about prostate cancer and the risks.”

Richard Tagoe, from Liverpool is 66. He had a slight awareness of the issue beforehand but attended the event to find out more, and while he was there, took the PSA test.

He said: “I took the test today and was really pleased to be able to. I am going to tell all my friends. Most people are not aware of the increased risk to Black men.”

One 39-year-old man who attended is a member of Liverpool Black Men’s Group. He has a long family history with prostate cancer, which prompted him to attend the event to discuss his risk.

“My father, grandfather and great-grandfather all died of prostate cancer”, he said. “As have some of my uncles, so I know the risk and I know for me it is high.

“I have come to the event to get some information and also I know I can get the PSA test here.

“It has been a really relaxed event – with the food and the music – and people feel comfortable to ask questions.”

Later in the week, there was an outdoor event at Liverpool’s Granby Market, with a CMCA Discuss Your Risk information stall. Almost 80 Black men and women positively engaged with our stall, asking questions thanking us for our information.

We also held an online meeting with the Merseyside Yoruba Community Association (MYCA) in Liverpool with 15 Black men and women positively engaged.

We produced two toolkits with information for community groups and primary care, giving them background, social media messages, a poster and leaflet, which they could use to publicise the campaign to their own members and patients. Picton Primary Care Network, in Liverpool, is currently working to use some of the materials to engage their patients, too.

This CMCA campaign has become a good practice example to other cancer alliances and the national NHS cancer team has requested to use our materials for the wider NHS and PCUK ‘Find the Missing Men’ campaign. The NHS North West communications team requested to use our patient survivors’ stories for future engagement and publicity and I am speaking at a PCUK innovation workshop in May where I will be presenting to other colleagues about the campaign, which has been advertised nationally.

There was clear feedback from the public that they would like more of this type of event, which is helping to reduce inequality in access to healthcare.

Dr Cait Taylor, GP and Joint Clinical Director and Chair of Central Liverpool PCN, said: “Prior to the event, Central Liverpool PCN and in particular one of our engagement leads, had done a significant amount of work with local Black male community members. This had started even before the event was mooted and it paved the way for ensuring effective event promotion and good attendance at the event.

“The campaign for increased awareness of the risks of prostate cancer to Black males is vital in such a diverse area as this and it was important that the event took place in a trusted community venue.

“There was a good range of speakers present, including Black men with lived experience of prostate cancer and of navigating the investigations and the health service. My impression was that attendees were encouraged and enabled to contribute to discussions and they were able to raise some really insightful issues about what is important to them.

“Liverpool Clinical Laboratories, and in particular Ruth Pruden, the Clinical Chemistry Services Manager, should be acknowledged for the way they were immediately open to supporting this event and assisting us with the practical aspects of what would be needed to undertake PSA blood testing in the community.

“I think that this may be unprecedented and access to PSA testing enhanced the quality of the event in terms of reducing barriers to accessing help and addressing immediate concerns. Testing was carried out after discussions with the doctors present.”

Mr Thiagarajan Nambi Rajan, Consultant Urologist at Wirral University Teaching Hospital, who was a speaker at the event said: “Regionally, trusts have reported increase in referrals for the month of March which shows positive outcomes from the wider campaign held nationally and locally. Our regional targeted approach to engaging African and/or Afro Caribbean men has produced a good outcome, too, with Black men being more informed and being proactive about their healthcare.”

I have learned a lot during the organisation and the delivery of our local prostate cancer awareness project. Here are my top tips for a successful project: